What a difference a year can make. In February 2017, Katie Hern, co-founder of the California Acceleration Project (CAP), spoke with the inaugural cohort of the California Education Policy Fellows Program (EPFP) about the challenges of reforming developmental education statewide from the bottom up—after working campus by campus for almost a decade to spur changes in a system of 114 California Community Colleges (CCC). When she met with the second cohort of EPFP Fellows a year later, the policy landscape had changed, due to the passage of AB 705 (Irwin) by the California Legislature. That measure requires the community colleges to implement reforms in developmental education to “maximize the probability” that a student will “enter and complete transfer-level coursework in English and mathematics within a one-year timeframe.”

It is too soon to know the effects of AB 705, but Hern’s story provides a textbook case of bottom-up practice reform setting the stage—through research, data sharing, and networking—for state policy relief in higher education. Her story also provides an example of the conversations taking place at EPFP, which aims to support the development of a new generation of education leaders working in K-12 and higher education and across the research, practice, and policy arenas to examine statewide challenges and opportunities in education.

CAP is a faculty-led professional development network co-founded in 2010 by Hern, an English professor at Chabot College, and Myra Snell, a math professor at Los Medanos College. CAP’s approach blends professional development and technical assistance to give community college faculty the tools and materials they need to implement new practices at the college level or in the classroom. This work has coincided with a groundswell of research examining the impacts of existing developmental (also known as basic skills) education practices on student persistence, completion, and equity.*

But even as many researchers and educators were examining developmental education practices, it was Hern, Snell, and others associated with CAP who traveled California to share updated research findings with colleagues in English and math departments throughout the community college system. As they did so, CAP gathered data and supported colleges to implement reforms that accelerated students’ progress through college-level coursework. Most recently this has included working with colleges to:

1. Broaden placement policies through the use of multiple measures and other strategies so that student readiness for college-level, credit bearing, coursework would not be gauged solely on one placement assessment; and

2. Implement co-requisite models so that students identified as underprepared can enroll in a transfer-level course with extra concurrent support, and thereby earn transfer-level credits in math and English within their first semester or year.

At campus-based and regional workshops, Hern and Snell made the case that community colleges were placing far too many students into remediation who did not need to be there. They shared data from colleges that had broadened their placement policies and had seen jumps in the completion of college English and math within a year. They shared growing evidence of student success from programs, campuses, and states that were no longer offering stand-alone remedial courses in English and math, and instead offering co-requisite courses that provide students with additional support. For example, Tennessee’s public colleges and universities stopped offering stand-alone remedial courses in English and math in fall 2015, and found that the share of students who completed the transfer-level course increased significantly (see figure), even among low-scoring students on the ACT placement test. In addition, opportunity and outcomes gaps in Tennessee narrowed as students of color and low-income students experienced the largest gains. 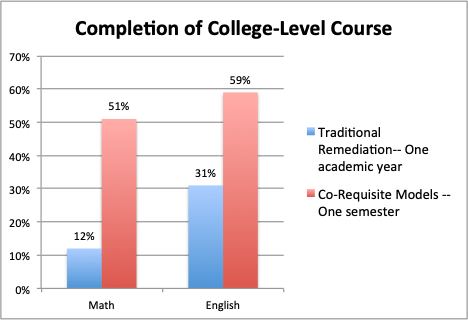 As Hern, Snell, and others shared these findings over several years, some English and math departments adopted reforms, but many were unconvinced that their own policies needed to change. CAP continued building its case for reform and focusing on campuses as the unit of change, but it also began expanding its outreach. The conversation Hern had in February 2017 with the first cohort of EPFP Fellows, most of whom were not community college practitioners, brought a variety of perspectives to the table. Two of these Fellows, Laura Metune and Daisy Gonzales, ended up impacting the development of AB 705 through their professional capacities. During the fellowship year, Metune was vice chancellor for external relations at the CCC Chancellor’s Office (CCCCO). Gonzales was principal consultant to the Assembly Appropriations Committee. The bill was authored by Assemblymember Jacqui Irwin who had been championing basic skills reform for several years and it was sponsored by The Campaign for College Opportunity, which took the lead building support among legislators, the governor’s office and partner organizations.

The goal of AB 705, according to the CCCCO, is “to ensure that students are not placed into remedial courses that may delay or deter their educational progress unless evidence suggests that they are highly unlikely to succeed in the college-level course.” In effect, AB 705 flipped the burden of proof onto those seeking to maintain traditional developmental education programs, since recent evidence from a variety of sources appears to show the efficacy of using multiple measures (including high school grade point averages) to identify students needing additional assistance in math and English, and of developing co-requisite models for helping those students earn transfer-level credit within their first year.

The theme of the most recent EPFP weekend, in February 2018, was the relationship between policy development and implementation in education. Two panels explored policy reforms in K-12 schools and in the California State University. In addition, Hern shared a panel with Metune focusing on the community colleges. A year earlier, Hern had discussed the struggles of working to implement bottom-up change in the largest system of higher education in the nation. At this convening, she and Metune talked about bottom-up practice reform meeting top-down state policy change, with Hern’s work and AB 705 as a case study. They also turned to the new challenges now facing the CCC: building capacity for using multiple measures and implementing co-requisite models for English and math classes, and analyzing outcomes to track and improve student success over time.

California EPFP is jointly administered by the Education Insights Center and the Center for California Studies at Sacramento State. Applications for the 2018-19 cohort are now available at the California EPFP website.

*For example, three years before CAP was founded, the RP Group released “Basic Skills as a Foundation for Success in the California Community Colleges,” popularly known in the CCC as the Poppy Copy. The report prompted many community college faculty and staff to rethink their basic skills programs, and many of these faculty and staff began sharing strategies and ideas through the RP Group’s annual Strengthening Student Success Conference. In 2010, Andrea Venezia, Kathy Reeves Bracco, and I released the findings of a study of students’ perceptions about their matriculation experiences in the CCC, called One Shot Deal (WestEd). We found that students viewed their assessment and course placement process as an isolated event about which they had received minimal advance information—yet which affected the cost of their program of study and their likelihood of completing a degree. Also during this time, the Community College Research Center (CCRC) was releasing national studies on rethinking and accelerating developmental education in community colleges. The Carnegie Foundation for the Advancement of Teaching was developing and implementing Math Pathways.